I doubt it will come as a surprise to you when I tell you that mobile traffic is increasing, but perhaps it would surprise you if I told you that mobile now comprises 65% of all digital media time. By “time” this graph refers to everything from browsing to shopping to watching streaming video. People are using mobile devices and specifically, mobile phones as their online go-to.

Let’s drill down into that a bit and see how the demographics break down.

97% of millennials are mobile users

In fact, 20% of millennials don’t use a desktop computer at all. Understanding this trend, which isn’t going anywhere anytime soon, is key to understanding how that one super-important consumer demographic gets their information online. Second to millennials are those who fall into the 35-54 age-group and as you can see, they too, are increasingly using mobile only to access the web. 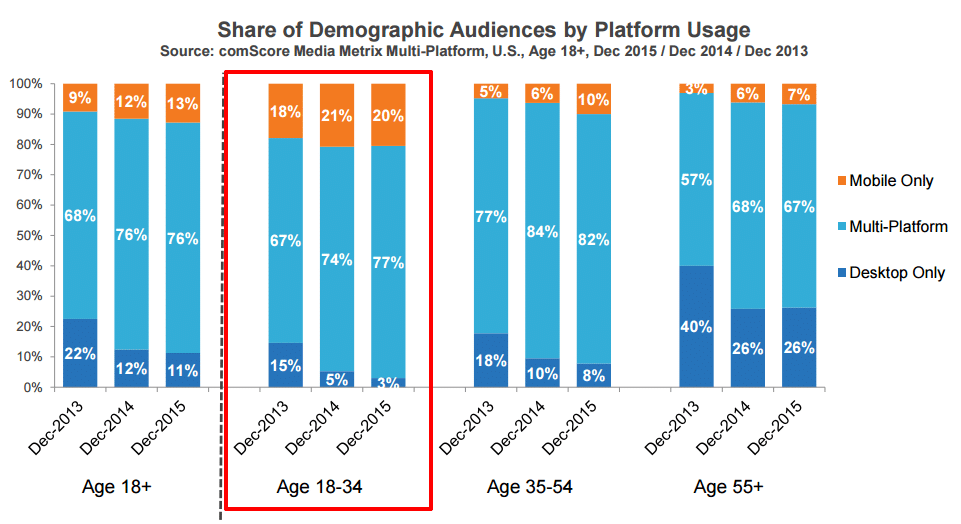 As users come of age, they are learning mobile first and desktop computers second – maybe. Why is this important? Well, for one, beer is a social experience – whether it’s in the taproom, an event, or at home with friends, people generally like to share beer and that includes sharing what they are drinking and where they are drinking it on social media. Adding to that point, breweries can almost do no wrong when it comes to posting on social media. Most breweries that post photos of their day to day processes, taps, beer in glasses, etc. generate likes en-mass that businesses in other verticals can only dream about; and that is because — I will say it again: beer is inherently social. 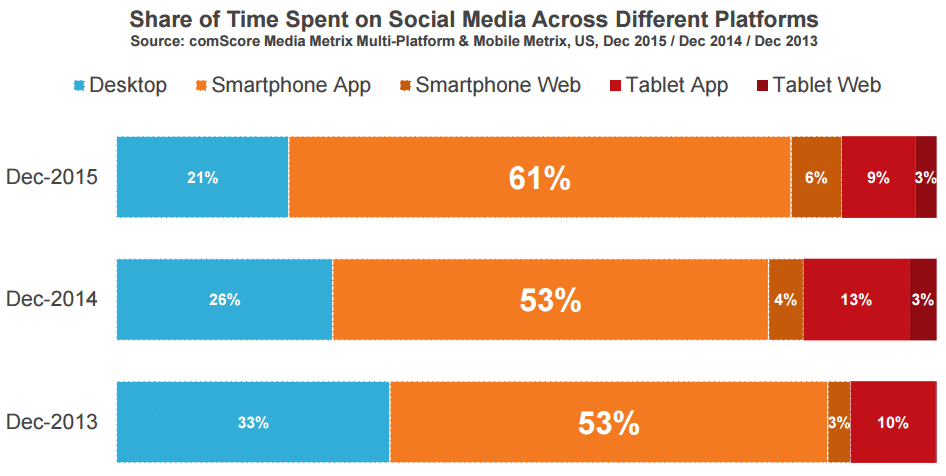 So, we’ve established that mobile popularity is growing in all age groups, but mostly in the millennial age group, which is loosely defined as people who reached adulthood in the early 2000’s or late 1990’s. In addition, we can see that people are spending more time on social media than ever before. This means that people who are visiting your website are coming from various places on the web via their mobile device more than ever. In fact, it’s because of these trends that in 2015 Google released news basically saying that if websites didn’t get their mobile $hit together, their search engine rankings would suffer, as they would be providing a rankings boost to sites that were mobile friendly.

If that’s not enough evidence to back up the idea that breweries, brewer’s guilds, and well, everyone honestly, needs a mobile friendly website, then I would like to prove it to you using the data from your brewery’s website traffic. Now, this is assuming you have Google Analytics installed – you do, right? If you don’t, contact us and we’ll install if for you at no charge — that’s how important we believe it is to track your website’s traffic.

First, log into Google Analytics and click on your website so that you are viewing the reports area. For starters, you should land on the Audience > Overview page by default with data that shows the past 30 days of traffic. If you aren’t there, you can get there by clicking “Audience” in the menu on the left side of the graph and select “Overview”. Now, the fastest way to see how much of your traffic was mobile is to use the “Segments” selection at the top of the chart (as seen below).

Once you’ve segmented your traffic you can see just how much of that traffic came from a mobile device, whether it was a phone or a tablet. Here’s an example from an account I chose at random.

As you can see in this example, over 70% of their traffic came from mobile devices, 58.66% from mobile phones and the remainder came from tablets, and this isn’t an isolated case either – I see a similar trend in almost every account we manage.

The time is now, (okay, actually it was a few years ago) to make sure your website is mobile-friendly. And with that, you will find that visitors stick around longer and find what they need faster. Making sure that you provide key information front-and-center, such as your location and hours will results in fewer phone calls your staff needs to answer. Yay!

With all of that said, let’s forget about your website traffic for a moment (just a moment though); all of this data boils down to a visitor that can find you online whether it’s via a search engine or social media is likely a visitor who will purchase your beer — and that, my craft-beer-loving-friends, is what’s most important.

Join our Facebook group and get advice to market your brewery.

Join our Facebook group and get advice to grow your brewery.